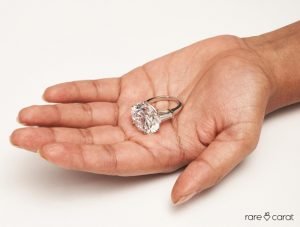 Considered to be the highest priced online sale ever of a single diamond, a 21 carat, Flawless, D Color, “Excellent” Round Brilliant diamond sold for $2.5 million. And the buyer believes he got a bargain.  The purchase was announced in the New York Post on November 8.  The diamond ring was purchased from online seller Rare Carat.  According to experts, the previous record was $2.1 million set at an auction at Christies in 2020.

The diamond was appraised by Master Gemologist Appraiser® Don Palmieri, founder and president of GCAL (Gem Certification & Assurance Lab). Palmieri examined the stone twice before it was placed in its platinum setting, and again after it was set for a final inspection. He appraised the diamond ring at $2.6 million for insurance purposes, but said: “I believe it might have sold for nearly $1 million more at a high end jeweler. This is an enormous sale that would normally take place in person.” The diamond went thru extensive testing at a number of stations at the GCAL lab in Manhattan in early October.

The buyer and his bride-to-be were on vacation in Montana when the ring arrived at their hotel. The ring was hand-delivered by an armed security guard, who arrived in an unmarked car. The purchaser then proposed, and to no one’s surprise, she said “yes”.