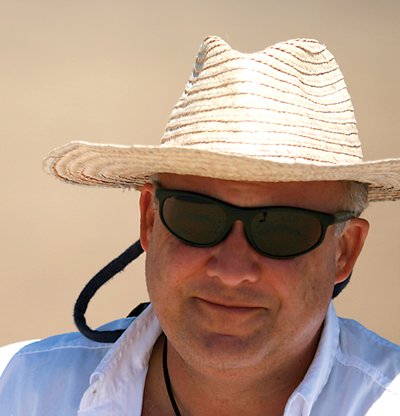 Friends and colleagues of colored gemstone authority and 2nd gen-jeweler James (Jim) Arthur Fiebig pay tribute to his extraordinary life. Acquaintances claim he never met a stranger, and industry insiders say he never met a gemstone he didn’t love. Born in Hillsdale, MI to Arthur and Ila Fiebig, owners of Fiebig Jewelers, Jim was immersed in gemstones early on.

But music remained his first love. As an accomplished musician he became jazz critic for the Michigan Daily, which took him to far flung places like the Montreux (Switzerland) Jazz Festival interviewing legends like Count Basie and Led Zeppelin. Music’s magnetism remained strong throughout his life. Friend and Guild Labs President Charles Carmona reflects, “As a consummate musician and entertainer, he could never walk past a piano without banging out a few tunes.”

When his parents bought their 2nd jewelry store in Sturgis MI, Jim took over management becoming a goldsmith and studying diamonds and gemstones at GIA (Gemological Institute of America). With his wife JoAnn (nee Nettleman), and their sons Chad and Jared, they thrived in a vibrant social life dominated by a passion for great cuisine, wine and lively conversation.

Community activism was essential to Jim, who involved himself in the Downtown Development Authority, Downtown Sturgis Association, Chamber of Commerce, Council of the Arts, and Sturgis Rotary serving as Secretary and President of Rotary. Named a Paul Harris Fellow in recognition of vital contributions, and as a member of Trinity Lutheran Church, he spearheaded fundraising efforts for a new pipe organ, teaching Sunday school and serving as an usher.

By 2005 Jim had traded his suit for sun block, selling Fiebig Jewelers to current owner Brad Rockey so he could live and work on the gem-rich island nation of Madagascar for a season. “Jim’s smarter than me – truly a genius in the literal sense with a remarkable memory for processing information,” Rockey noted. “What a passion he had for colored stones. But his inner circle knows him for his kindness. His capacity for generosity is the size of Africa” Jim’s insatiable zeal for travel to exotic colored gemstone destinations took him to Brazil, Tanzania, Kenya, Zanzibar, South Africa and Madagascar where he guided other jewelry professionals to gemstone opportunities.

Jim recalled, “I started traveling to Madagascar and other developing nations simply to buy gemstones for my jewelry store in Sturgis, Michigan. The trips were very profitable; the gems cost dramatically less and the PR value of each trip was immeasurable.” But a shift occurred during his first two visits to Madagascar. “I became aware that this island, roughly the size of California was home not only to the most diverse and prolific gem sources on earth, but also the most amazing people.” Carmona’s first encounter with Jim was there too. “We had the best of times in the best gemstone location, trekking to sapphire mines, and spending many evenings together. “

Yoshi Kirsch, CEO Zultanite LLC, recalls, “I remember well the first time I met Jim in Tucson in 2006; he was giving a seminar on colored gemstones; specifically promoting enhanced colored stones. He asked the audience ‘What is your appearance in the mirror first thing in the morning? Don’t you look better after a shave or with make-up? The same goes for treated gemstones. If they look better after enhancement, then why not do it?’ This was Jim as we remember him!” Kirsch joked that Jim may have lamented that stance later on when he served as a global sales manager for Zultanite Gems LLC, promoting the all natural gemstone.

Devon Fine Jewelry founder Nancy Schuring first met Jim in 2008 on a group trip to Madagascar. “I never met anyone with his kind of enthusiasm for colored gemstones. He could go off on a riff with interesting facts about colored stones and leave one spellbound. He simply lived and breathed gemstones.” But according to her, there were other traits that trumped his astonishing knowledge base. “He was loved by everybody there.” His empathy for local gem sellers was palpable, Schuring found. “He knew who needed a sale and would subtly transmit that detail to you so you would trade with that seller.”

The Devon Foundation was born of a 2008 summer trip to Madagascar Nancy Schuring took, guided by Jim. Later the foundation was established to help the African people work in the gem trade and learn marketable skills to improve their life. Jim served on the Board of Directors. Today many Jim Fiebig Scholarship recipients are preparing for a better life through gem training programs.

Master gem cutter Steve Moriarty, owner of Moriarty’s Gem Art developed a close friendship with Jim over decades of international travel. “As a gem cutter,” Steve says, “I judged the rough that miners and dealers presented. Jim took care of the most difficult part of travel, communications and logistics. I could focus on my job while Jim was learning what he could from the dealers.” The friendliest guy around is Steve’s assessment of Jim. “He made friends at home but also wherever we went. Jim spoke their language be it Portuguese, Swahili, Malagasy or the language of music.”

The last years of his career were as General Manager of the Des Moines landmark, Joseph’s Jewelers. Owner Toby Joseph cited, “The thing I think about most with Jim is how he could regale with the most in-depth colored gemstone education on the spur of the moment; something he often did at our Saturday morning meetings.” According to Joseph, Jim’s forte was something he calls ‘clienteling’. Jim’s immense imprint at Joseph’s Jewelers was how he engaged with customers who came into the store. “People found a real friend in Jim who understood genuine relationship building.” Jim’s unique touch warranted special homage, so Joseph’s Jewelers organized a lemur (endemic to Madagascar) exhibit appropriately dedicated to Jim Fiebig at the Blank Park Des Moines Zoo.

In the end, Jim’s personal faith in God and his love for others informed every decision he made. “We’ve lost a special gift to our industry,” says Rockey. And Joseph concurs. “Nothing took him down. Talking with Jim was speaking to a huge positive force.”

Perhaps Jim’s most poignant legacy comes from someone who can never repay the opportunity he granted her. A 2016 Jim Fiebig Scholarship recipient Grace Sosten said, “Many thanks for the love and kindness.”