overnors of the Gemological Institute of America (GIA) concluded its second 2008 meeting on November 24. Actions taken by the Board include naming a new Board chair and vice chair, seating four new governors and expanding the office of the GIA president. In addition, the Board honored five departing Board members who have reached the end of their terms. GIA also named retiring GIA Chairman Ralph Destino as GIA chairman emeritus. 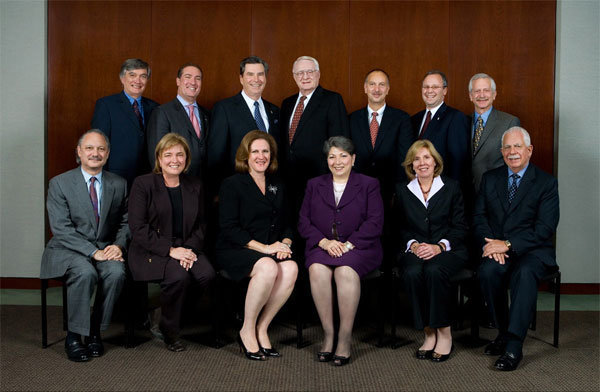 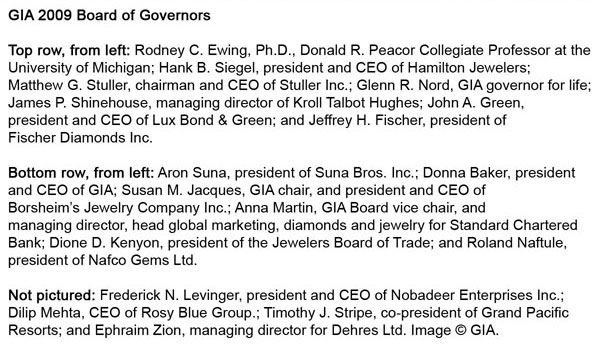 The new Board of Governors’ chair is Susan M. Jacques, president and chief executive officer (C

EO) of Borsheim’s Jewelry Company, Inc., based in Omaha, Nebraska. Borsheim’s is one of America’s largest independent retail jewelry stores and a Berkshire Hathaway, Inc. company. Jacques was born and raised in Rhodesia (now Zimbabwe) and graduated from the GIA resident Graduate Gemology program in Dec. 1980. She began work as a sales associate and appraiser at Borsheim’s in 1982, and was subsequently appointed by Warren Buffett as president and CEO in Jan. 1994.

Jacques is on the board of several civic and charitable organizations, including Creighton University and the University of Nebraska Medical Center. She is also a member of the Young Presidents’ Organization. She is active in the gem and jewelry industry and, in addition to her GIA duties, serves on the boards of Jewelers for Children and the Jewelers Vigilance Committee, as well as the Women’s Jewelry Association Advisory Board.

“I am honored to be elected by my peers to head the GIA Board,” said Jacques. “In spite of the challenges of a difficult worldwide economy, the Institute is making some exciting and positive moves on behalf of the gem and jewelry industry, its students, and the general public, to improve and expand its services. It will be a unique opportunity to serve the public and the industry in an important way. I look forward to working with my colleagues to advance GIA’s critical work as the world’s foremost authority in gems and jewelry and to continue to meet its mission of protecting the public trust.”

The Board also elected as its vice chair Anna Martin, managing director, head global marketing, diamonds and jewelry for Standard Chartered Bank. Prior to this position, Martin was senior vice president and regional manager of ABN AMRO international diamond and jewelry group in New York for more than 42 years. There, she developed banking services to help meet the financial needs of the diamond and jewelry industry.

Martin is a dedicated member of the jewelry community and was inducted into the Diamond Hall of Fame by the U.S. Diamond Industry Steering Committee. She has received many awards throughout her career for her community and industry work. She is a member of the Women’s Jewelry Association Board and its past president. She is a board member for the Jewelers Board of Trade, the JCK Advisory Board and Jewelers for Children.

The four new governors seated by GIA are John A. Green, Hank B. Siegel, Aron Suna and Ephraim Zion.

Green is president and CEO of Lux Bond & Green, a jewelry store chain established in 1898 by his great-grandfather, which has grown to eight locations in Connecticut and Massachusetts. He is also committed to helping many nonprofit organizations within his community and the industry. Currently he acts as chairman for Jewelers of America, and is a board member for Jewelers for Children and the Jewelry Information Center’s Gem Awards committee. He is also a director for Ballou Findings of Providence, Rhode Island.

Siegel is president and CEO of Hamilton Jewelers,

based in Lawrenceville, New Jersey. Siegel is the third generation of the Siegel family to be president of the firm, and was elected to that position in 1993. Hamilton Jewelers has five locations: three in New Jersey and two in Florida. Siegel is deeply involved in the industry and recently completed a two-year term as president of the Jewelers Vigilance Committee. He is on the boards of Jewelers of America and the Jewelry Information Center, as well as the advisory board for the JCK Show and editorial advisory board for National Jeweler Magazine. He was elected to National Jeweler Magazine’s Retailer Hall of Fame in 1997.

Suna is president of Suna Bros., Inc. and is the third generation of this specialized high-end jewelry manufacturing company in New York. The company was started in 1934 by his grandfather Kenneth Suna and great-uncle Joel Suna. A member of the 24 Karat Club since 1979, Suna executed a one-year term as president in 2005. He has also been active in the Jewelers Vigilance Committee and the National Council for Community Justice.

Zion is the managing director for Dehres Ltd., one of Asia’s leading d

ealers of large diamonds and fancy colored diamonds. His career in the industry started in 1960 when he was 14 years old, serving an apprenticeship as a diamond cutter in a diamond factory. He left Israel in 1967 for New York where he specialized in cutting large diamonds. Zion set up business in Hong Kong in 1971 and formed a 14-year partnership with the Siba Group. In 1985, he formed Dehres Ltd. and took the company international with offices in New York, Tel Aviv, Shanghai and Thailand.

Donna Baker, GIA president, said, “We are very excited to have four persons of such stature in the industry coming onto our Board. We look forward to tapping into their wisdom, experience and enthusiasm to accomplish the strategic plans GIA has laid out for itself to meet the needs of the public and the trade.”

In another important move, the Board expanded the office of the GIA president to include that of chief executive officer (CEO). GIA President Donna Baker will now be further responsible for carrying out the strategic plans and policies established by the Board in her duties as CEO. As president, she continues to be responsible for operations, tactics, and attending to the daily business of the organization.

Ralph Destino, GIA chairman, announced his retirement at the Board meeting, which will become effective Jan. 1, 2009. Destino served GIA in various capacities for more than 16 years. He joined the Board in 1992, became executive chairman of the Board from 1997 to 2005, and then was chairman of GIA from 2005 onward. In honor of his exemplary service, the Board named him GIA chairman emeritus.

Baker said, “Ralph achieved much during his tenure here at GIA to truly further the Institute’s reach and strengthen its ability to fulfill its vital mission. He generously gave of his substantial talent, energy and dedication to GIA and its mission, which is evident in his successes in so many different arenas. We are grateful for all he has done.”

Meanwhile, five governors are leaving the Board having reached the end of their terms of service.

Helene Fortunoff is vacating her post as GIA Board chair after eight years on the Board. Founder and former CEO of Fortunoff Fine Jewelry, Fortunoff was instrumental in helping guide the Institute through recent major decisions, including GIA’s global expansion and increased focus on improving internal GIA processes.

The other departing governors are Gordon E. Brown, Jr., Ph.D., Kirby Professor of Earth Sciences and professor and chairman of Stanford Synchrotron at Stanford University who was on the GIA Board for 20 years; William B. Cottingham, Ph.D., president emeritus, G.M.I. Engineering & Management Institute for six years; Eli Haas, president and CEO of ENH International serving GIA for 20 years; and Sheldon Kwiat, co-president of Kwiat, Inc. on for 12 years of service.

Baker said, “These wonderful people are visionaries who have demonstrated throughout the years their commitment to achieving excellence in all things, top-notch professionalism, and a deep dedication toward helping GIA achieve its goals. We will miss their insightful counsel.”

The new GIA Board now includes: Donna Baker, president a

GIA can be found on the web at www.gia.edu.