(CARLSBAD, Calif.) – The Gemological Institute of America (GIA) announced that its “Four Cs of Diamond Quality” brochure is now available in a total of 10 different languages.

GIA is offering the “Four Cs” brochure in the original English version, the Spanish-language edition announced in 2008, plus eight other languages including: Italian, Thai, Korean, Japanese, traditional (or formal) Chinese, simplified Chinese, Hindi and Gujarati.

The full-color “Four Cs” brochure is designed to educate the public about the main elements of diamond quality. All diamonds share certain features that allow people to compare and evaluate them. These features are Cut, Color, Clarity and Carat Weight, better known by their shorthand as the Four Cs. GIA created the Four Cs in the mid-1950s, as well as the International Diamond Grading SystemTM, the grading standard based on the Four Cs which is used by jewelry professionals around the world.

The “Four Cs” brochure features photographs and illustrations that help people understand the language of diamonds so they are better educated when speaking to a jewelry professional. In addition, the pamphlet shows the GIA Color and Clarity scales, the GIA Cut scale for round brilliant diamonds, and photos of several approximate carat sizes for round diamonds.

GIA’s choice of timing when it introduced new translations was based on where GIA could best serve the public, and where the Institute’s international laboratories and schools are located.

“This is an important initiative to further spread information about the Four Cs of diamond quality to the general public, gem enthusiasts, clients, and the gem and jewelry industry around the globe,” said Kathryn Kimmel, vice president and chief marketing officer. “The Institute is dedicated to educating individuals so they can make informed decisions when purchasing a diamond.”

Kimmel added, “We want people to know we are committed to helping them learn about diamonds, no matter where they live in the world.” 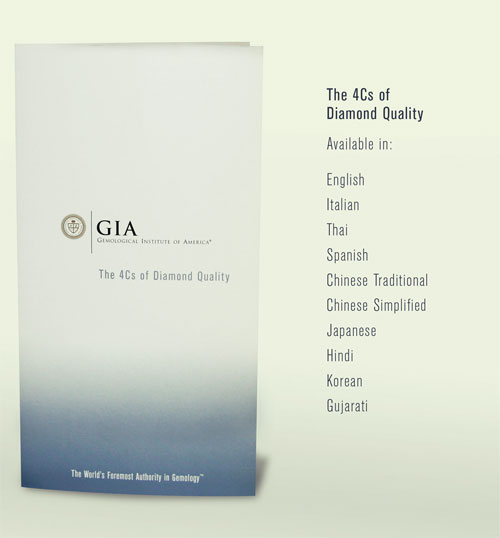 To order copies of GIA’s Four Cs brochure, visit http://retailer.gia.edu. The first 100 brochures in any one language are free; additional brochures may be purchased in quantities of 100 for $12.50 plus shipping, handling, and applicable sales tax.