Rembrandt Charms has joined DragonSpeed as a launch sponsor of the globally accomplished sportscar team’s NTT IndyCar Series entry to be piloted by Ben Hanley in five 2019 rounds of America’s premier open-wheel series. 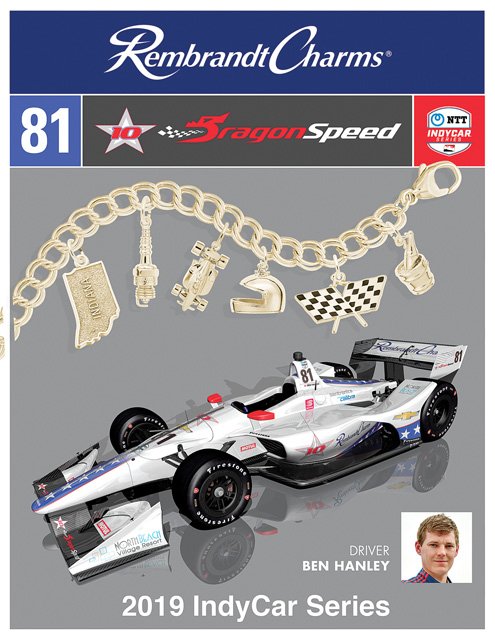 Eric Lux, Rembrandt Charms Vice President, raced with Elton Julian to win the 2011 IMSA LMPC Championship and drove for DragonSpeed in 2015, helping Mercedes-Benz secure its first American GT title. “I’ve admired Elton’s boundless determination and attention to detail which have driven his team to remarkable achievements. Rembrandt Charms is proud to associate itself with Elton, Ben, and the entire DragonSpeed team as they embark their IndyCar quest,” said Lux.

DragonSpeed team principal Elton Julian said, “IndyCar is enjoying a major upswing thanks to the quality of the racing produced by the current rules and intensive promotion of the series. The ability to attract the support of dynamic brands like Rembrandt Charms is proof of that. It’s will be a particular pleasure to work again with Eric. The skill and commitment he showed on the race track are mirrored in the success of Rembrandt Charms.”

Rembrandt Charms has been designing and manufacturing charms and charm bracelets for 50 years and offers thousands of charms in a wide range of precious metals,. All products are manufactured in the US and Canada, and covered by a lifetime warranty. Learn more at www.RembrandtCharms.com.