Jeweler for a Cause – Italian Tradition

(NEW ORLEANS) – “Putting your religious traditions on display in your business may be ‘politically incorrect’ by national standards, but things are a little different down yonder in New Orleans,” says Anne Dale, owner of Anne Dale Jeweller in Mandeville, La.

As a little girl Anne remembers her home filled with music – her father, Paul Ferrara, was a well known jazz drummer playing with the famed Louie Prima back in the 1950s. Prima was best known for “jazzin-up” Italian folk music songs like “Oh Maria”, “Just a Gigolo”, “Angelina” and many others.

“If you are from New Orleans, Italian and Catholic, the Feast of Saint Joseph is a part of you. The statues, cookies, red gravy, lucky beans and music are a welcome break from the sacrifices of Lent. Lent, of course, begins on Ash Wednesday the day after Mardi Gras which is 46 days prior to Easter Sunday. I guess it can be a little confusing if you don’t know what it means,” says Dale.

“Actually you do not need to be Catholic or Italian. You see, in the Big Easy we celebrate just about everything… heck we second line (dance) at funerals.”

The tradition of the Saint Joseph Altar was brought to New Orleans by Sicilian immigrants in the late 1800s – a tradition dating back to the 12th century in Sicily. While on the brink of starvation due to a drought, the people turned in prayer to Saint Joseph, and soon, the rains came, the crops grew, and the people were saved. To thank their patron Saint, they gave him back the gift they were given, in the form of a feast laid on an altar. After the blessing and celebration the food was distributed to the poor. 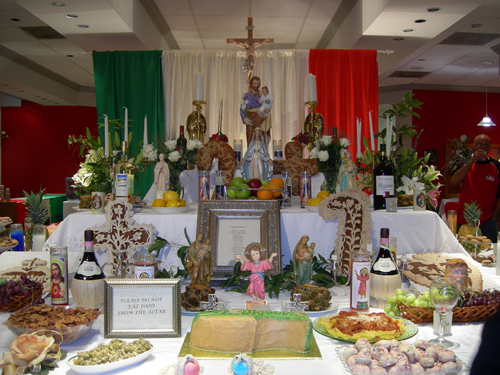 Louisiana retailer Anne Dale Jeweller set up a Saint Joseph Altar in her store.
The Altar brought over 300 visitors to her store.

In Sicily fava beans, which were commonly fed to the live stock, were the only thing that would grow on the island during the drought. It was one of the few foods available to sustain the people. Today these beans are blessed on the altar, with the belief that your pockets will never go empty as long as you have one. Many New Orleanians keep “Blessed Beans” in their pockets, purses and in their pantries for good luck. 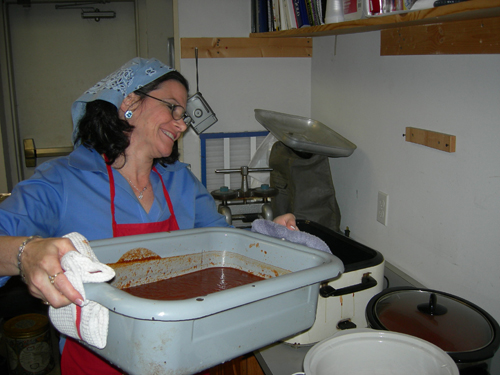 Anne Dale Jeweller recently set up a Saint Joseph Altar in her store. The store was closed for business during the altar, but welcomed anyone wishing to pay homage, enjoy pasta, cookies, music and receive a New Orleans “lucky bean.”

Beyond all expectations, over 300 people visited the altar – many brought elderly family members that recalled having altars in their homes as children. Food and donations were collected and given to the local Covington Food Bank that feeds the less fortunate families in the community. (image left: Jeweler Anne Dale preparing an Italian feast for the Saint Joseph Altar she set up in her store.)

For more information contact Anne Dale (GG, PG, FGA) at 985-626-4266, info@annedale.com or www.annedale.com. You can also see Anne Dale at the JCK Las Vegas Show where she will be a guest speaker on May 28. Dale’s discussion is scheduled for 9:30 am – 10:45 am. She will speak about Making an Impact: Applying Cause Marketing Techniques.