Nearly 20% of sales paid for via cryptocurrency 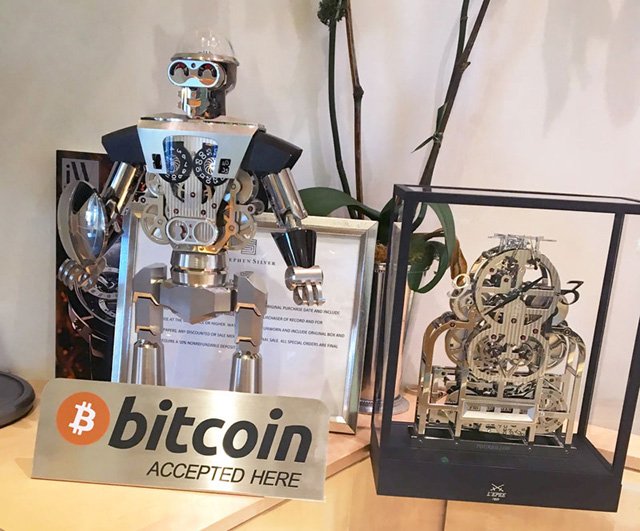 (NEW YORK) – Since establishing his retail operations in 1980, Silicon Valley jeweler and gemologist Stephen Silver has demonstrated an uncanny adaptability to emerging technology. In an industry rocked by changing consumer behavior, Stephen Silver Fine Jewelry has seen tremendous sales growth since 2014. Mr. Silver expressed that their early embrace of cryptocurrency payment processing has led to a new area of consumer spending.

In a move led by the company’s President, Jared Silver, this early embrace of cryptocurrency has proven to be a visionary shift for their traditional luxury industry. Many of the Silvers’ clients are elite gemstone collectors and successful figures in the technology industry hailing from both Silicon Valley and around the world.

The immediacy of the cryptocurrency transactions is highly appealing to this global clientele, who can purchase important color gemstones, haute horology timepieces, and custom and estate jewelry from Stephen Silver nearly instantaneously from around the world.

The Silvers view rare gemstone acquisitions as objects of portable wealth, a stable, alternative asset class that appreciates for generations. Finalizing these purchases through cryptocurrency processing allows investors to diversify their portfolio from a highly volatile asset class to a more stable tangible investment strategy. The benefits of cryptocurrency payment processing have revolutionized his business, as Jared Silver further explained:

“Private investors can take advantage of cryptocurrency to facilitate major purchases for millions of dollars from anywhere in the world, with an immediacy that cuts out third-party wire transfers and credit card processors. Along with these benefits, by transacting in cryptocurrency, investors additionally save up to 1.5% on purchases made with Bitcoin as they will not incur conversion fees. At the end of the day, everybody wins.”

Stephen Silver is a Silicon-valley based gemologist, geologist, diamonteer, and philanthropist. As Chief Executive Officer of S. H. Silver Company, a premiere timepiece and jewelry house located in Menlo Park, California, Stephen Silver has established an international reputation amongst elite collectors for his expertise in diamond and color gemstone cutting, jewelry design, and fine timepieces, while his business acumen has earned widespread acclaim in the watch and jewelry industry. Silver founded an estate jewelry firm in Menlo Park specializing in antiques and precious stones.

Silver studied geology at the Gemological Institute of America, going on to found an estate jewelry firm in Menlo Park specializing in antiques and precious stones and gaining access to a number of history’s most important colored gems. Mr. Silver is widely recognized for his donation of the storied “Cullinan Blue Diamond Necklace” to The Smithsonian Museum of Natural History in Washington D.C. Silver has also recut and improved important color gemstones which have sold for hundreds of millions of dollars at auction or to private collectors, such as “The Pink Promise Diamond,” sold for over $32 million in 2017.

Stephen Silver has since expanded his business into a vertically integrated wholesale manufacture and retail operation of international reach, with two locations based in and around Menlo Park, California. Beyond his renown as a gemstone and jewelry expert, Stephen is also recognized in Silicon Valley for his extensive philanthropic work and community involvement, having donated millions in recent years to causes in his community and investing in emerging technologies. For more information, visit http://shsilver.com/