The distributions will include one million dollars to the National CASA Association to continue funding the Champions for Abused Children program. JFC began a partnership with National CASA in 2002 and since that time has donated more than $5,300,000. That support has helped to provide a CASA volunteer for 3,667 children in the foster care system in 336 communities across the country. JFC support has also been used to develop public service announcements for CASA that have resulted in more than 15,000 new volunteers being recruited.

The National CASA Association, together with its state and local members, supports and promotes court-appointed volunteer advocacy for abused and neglected children so that they can thrive in safe, permanent homes. 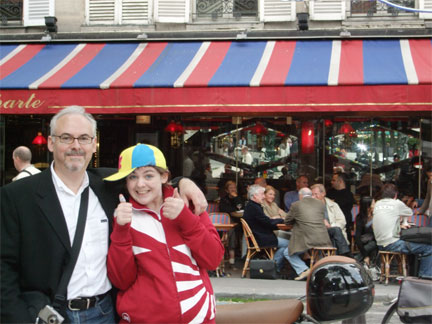 Wish child Vava Cole and her father Marty in Paris fulfilling her wish.

St. Jude Children’s Research Hospital is dedicated to finding cures and saving children. The commitment of the Jewelers for Children to St. Jude has helped the hospital continue its effort to provide state-of-the-art treatments for children with cancer and other catastrophic illnesses and to research life-saving breakthroughs that are freely shared with the medical community worldwide. Thus, one child saved at St. Jude means many more saved worldwide. JFC helps ensure this crucial research will continue and that no child will ever be turned away from St. Jude because of a family’s inability to pay. JFC endowed the Bone Marrow Transplant Clinic at St. Jude in 1999, and since then almost 900 children have received bone marrow transplants. Additionally, JFC has funded the Stem Cell Transplantation Laboratory and a chair in the Genetics and Gene Therapy departments. JFC is currently working to fulfill a $5 million pledge to fund immune system research.

Additionally, $500,000 is being pledged to the Make-A-Wish Foundation of America. The Make-A-Wish Foundation grants the wishes of children with life-threatening medical conditions to enrich the human experience with hope, strength and joy. Born in 1980 when a group of caring volunteers helped a young boy fulfill his dream of becoming a police officer, the Foundation is now the largest wish-granting charity in the world, with 67 chapters in the United States and its territories. With the help of generous donors and more than 25,000 volunteers, the Make-A-Wish Foundation grants a wish every 41 minutes and has granted more than 153,000 wishes in the U.S. since inception. Since 1999, JFC and the jewelry industry have impacted the lives of over 1,000 children and their families in the United States by funding wishes through the Wish A State program. JFC’s support to the Foundation now totals $6,500,000.

JFC’s support of the Elizabeth Glaser Scientist Award and the International Leadership Award program has allowed leaders in the field of pediatric HIV/AIDS research to bring hope to children and families worldwide. Since 1999, JFC has provided more than $6,700,000 to the Foundation. In addition to the Scientist and International Leadership Awards, JFC has funded prevention of mother-to-child transmission programs in the Democratic Republic of Congo and Angola, where combined, more than 200,000 HIV positive women have received pre-natal counseling and treatment to allow them to give birth to HIV negative babies. JFC also funded 23 Elizabeth Glaser Research Fellowships for deserving clinicians and scientists.

The Santa-America Fund will receive $35,000 for the second year in a row. Santa-America, founded in 2003, brings the highest quality Santas together across America to focus on their special mission: an unhurried visit by a loving, committed, trained, back-grounded Santa to families facing physical and emotional crisis.

JFC also announced that $50,000 will be given to the Juvenile Diabetes Research Foundation, a new charity partner. The Juvenile Diabetes Research Foundation International is the world’s largest charitable funder and advocate of type 1 diabetes research. The mission of JDRF is to find a cure for diabetes and its complications through the support of research.