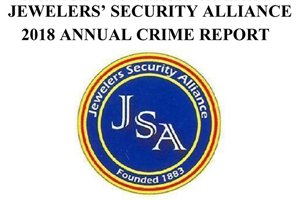 Commenting on the favorable results, John Kennedy, JSA President stated: “Due to support from the industry, JSA has been able to add substantial resources to its crime analysis and intelligence capability, its reward program and its crime information-sharing effectiveness. In addition to informing the industry with frequent Crime Alerts, JSA shares detailed intelligence information regarding jewelry gangs, suspects and crime patterns with the FBI and other law enforcement agencies, both here and abroad, on a daily basis. JSA receives countless messages of thanks from law enforcement personnel for information that has helped in their investigations, and from jewelers who have prevented crimes.”

JSA’s Report indicated both the ups and downs of U.S. jewelry crime statistics for 2018:

Kennedy added: “A big advance in JSA’s work, and an important element in the reduction in crime, has been JSA’s growing ability to map crime patterns and target hot spots, and to work with multiple law enforcement agencies spanning many states and jurisdictions to coordinate information sharing on suspects and gangs. When JSA sees a crime pattern emerging, JSA is able to be all over it. Information goes out to JSA’s Members, to the broader industry, to the trade media, and a dialogue is opened with the relevant FBI or other law enforcement personnel, including agencies in other countries.”

To see a copy of the full report, go to the JSA website at: https://jewelerssecurity.org/wp-content/uploads/2019/09/2018-JSA-Annual-Crime-Report.pdf

The Jewelers’ Security Alliance (JSA) is a non-profit trade association providing crime prevention information and services to the jewelry industry. JSA, founded in 1883, has over 21,000 member locations and works closely with the FBI and law enforcement agencies, both in the U.S. and abroad. Visit JSA at www.jewelerssecurity.org.