Donates $15,000 for disaster relief in Missouri 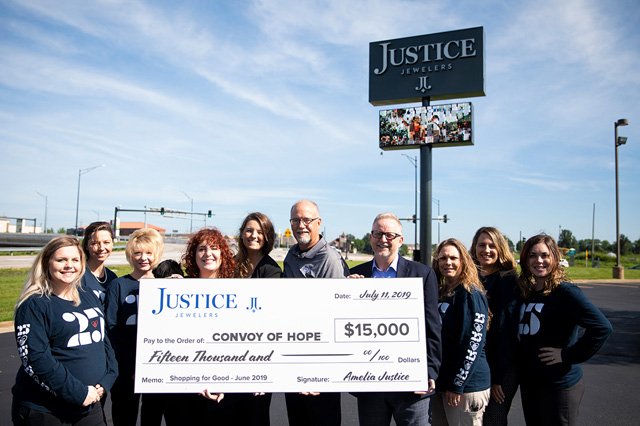 “Giving back to the communities we serve has been part of our DNA for decades,” said Justice. “We help customers celebrate the happiest occasions in their lives, and it’s important for us to be there during hard times as well. Storms and flooding have impacted so many in Missouri this year. With the help of our customers and working with Convoy of Hope, we were able to raise funds designated to help those in our home state as they seek to rebuild their lives.”

“We are so thankful for partners like Justice Jewelers,” said Jeff Nene, Convoy of Hope’s national spokesperson. “Convoy has served more than 20,000 individuals with more than 300,000 pounds of disaster relief supplies in Missouri due to the floods and tornadoes we experienced this spring. We would not be able to do the work we do in our home state and around the world if it weren’t for partners and donors like Justice Jewelers.”

Convoy of Hope’s Disaster Services team has responded to 15 new disasters since the beginning of the year and is still resourcing four ongoing responses from 2018. To learn more about Convoy’s Disaster Response services, visit www.convoyofhope.org.

Convoy of Hope is a faith–based organization with a driving passion to feed the world. With a long history as an early responder in times of natural disasters, Convoy of Hope has been a Four Star Charity as recognized by Charity Navigator for 14 consecutive years. Convoy of Hope has served more than 100 million people since it was founded in 1994.