Kameleon Jewelry® proud of another successful “Poppin’ for the Cure” campaign

Kameleon Jewelry® is proud to announce the results of the 2012 Poppin for the Cure campaign.  Since starting business, Kameleon Jewelry® has donated a portion of its proceeds from the sale of the Pink Ribbon JewelPops® to the fight against breast cancer.  During the month of October, stores throughout North America participate in the campaign. 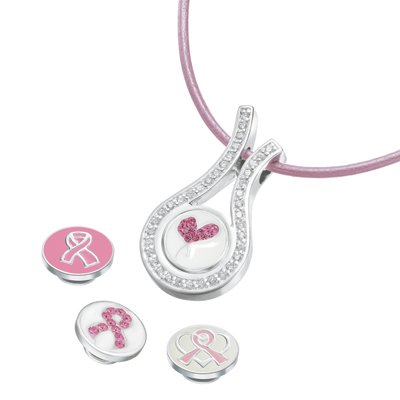 In addition to the new JewelPop® design, Kameleon Jewelry® also announced that its donation would be doubled from $1 to $2 per JewelPop®. The total raised from sales for the 2012 campaign was $5056 up from the 2011 result of $3084.

For a second year, Kameleon Jewelry® has also added to its donation amount asking for help from their Facebook community. The company offered one dollar for every new “like” the Kameleon Jewelry® page received. Facebook fans helped out by inviting their friends and promoting the offer, raising an impressive $1408 in Facebook likes alone, up from the 2011 total of $1205! The grand total for sales and Facebook likes for 2012 was $6464 donated to the Susan G. Komen Foundation and the Canadian Breast Cancer Foundation.

The Poppin for the Cure campaign has become a very important campaign for Kameleon as more and more retailers take on the challenge to help in the fight against Breast Cancer.  Kameleon Jewelry® creator and President Robert Smith said: “We are very proud every year of the work our retailers put in to help promote the Pink Ribbon JewelPops®.  Their enthusiasm is what makes this campaign a success year after year. This disease is one that touches so many families, we are happy that we are able to help raise awareness and much needed funds.  Kameleon Jewelry will continue Poppin’ for the Cure for many years to come.”

For more information on the Poppin’ for the Cure campaign, contact Kameleon Jewelry® at 866-431-4484 or info@jewelpop.com. Visit JewelPop at www.jewelpop.com.