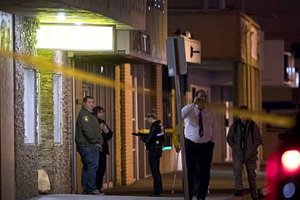 An employee, a customer and a robber were hit by bullets in a shootout Saturday inside a small, family-owned jewelry store during a failed central valley heist, according to Metro Police.

The robber died and the employee was critically wounded, while the customer is expected to survive, Lt. Ray Spencer said. The other suspect is still at large.

The store is tucked in a large shopping center located in the 900 block of Sahara Avenue, near Maryland Parkway.

“Anyone who’s going to go into a business during daylight hours to conduct a takedown robbery in that manner,” Spencer said, “I can tell you we’re going to put an extraordinary amount of resources into this to make sure that the outstanding suspect is held accountable.”

The two armed men planned to tie up employees and customers while the robbing the store, Spencer said.

Read the full story at https://lasvegassun.com/news/2018/dec/29/robber-killed-in-failed-las-vegas-jewelry-store-he/