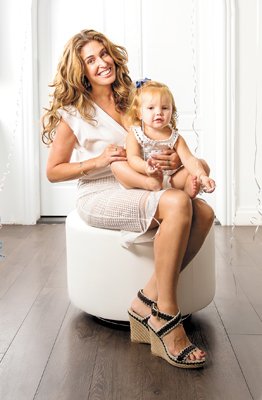 (NEW YORK) – Timeless Fine Jewelry has just released a brand new jewelry line that is more than a mere conversation piece. My Story began when Chief Marketing Officer of Timeless, Jackie Cohen decided she wanted to have a baby. After years and thousands of dollars spent on attempting to get pregnant without any success, Jackie took the alternative route and applied to be an adoptive mother.

She was warned about the common waiting periods before parents receive the chance at adopting a child, but was determined to become a mother. One day, Jackie received a phone call responding to a set of national adoption advertisements she put out. The mother was days away from giving birth and said she could not keep the baby. Five days later Jackie was on a plane to Indiana to meet the mother and join her for a checkup.

“We ​spent two days getting to know each other and then ​went to the hospital for the checkup​,” Jackie recalls. “​S​he kept saying, ‘​I’m ready​,’​ but the staff wasn’t taking her seriously. When a doctor finally came in and gave her a check up, he said, “​Woooohh, there’s the baby’s head. We’re having a baby!!!’

“​T​hree hours later, I’m holding my baby. I had the privilege of seeing my daughter born, which is a miracle on its own.”

Having begun her search to adopt a child only eight days prior, Jackie flew back home to New York City with baby Julia in her arms.

Her incredible journey inspired her to create a small, simple baguette ring in citrine, Julia’s birthstone, to symbolize her coming into motherhood. Little did she know that this was the beginning of something much greater.

“I made a single birthstone ring for myself to celebrate that​ ​milestone,” said Jackie. “I engraved Julia’s name and birthdate on the inside. Every time I shared the ring and my story, everyone wanted their own. I came to realize, every woman  has her own stor​y.​”

The ring caught the attention of her friends and jewelry clients alike, each equally enraptured by its unique craftsmanship as well as the tale of how it came to be. Its surprising popularity and eye-catching design led Jackie to want to create more like it, soon evolving a single ring into an entire collection she aptly calls My Story.

“Everyone has a story,” Jackie says. “Whether it’s your child, your parents, your siblings, there is always a story. I wanted to create a line that would bring out those stories through our jewelry.”

My Story is a chic and colorful collection of rings, earrings and pendants available in yellow, white and rose gold. Highly customizable, each piece features a special gemstone to give it a playful pop while still retaining elegance for everyday wear, always keeping your story close to your heart.

Inspired by Jackie’s journey to motherhood, Timeless Fine Jewelry has officially partnered with national non-profit organization Helpusadopt.org, a financial assistance grant program that provides couples and individuals with grants of up to $15,000 towards their domestic, international, foster or special needs adoption expenses (the average adoption now costs around $40,000).

Founded in 2007, Helpusadopt.org has helped build over 100 families and awarded almost a million dollars in total adoption grants. Having become all too familiar with the struggles and strains that trying to adopt a child can have on an individual or a couple, both emotionally and financially, the mission of Helpusadopt.org struck a personal chord in Jackie’s heart and led her to not just contribute financially to the organization, but stand behind them in their mission to help more children who are up for adoption  find new, loving homes.

Most recently, Timeless became a backer of Helpusadopt.org’s annual charity event, The Face Of Adoption, becoming a Gold Level sponsor with a $5000 donation to the organization, as well as a $1000 Timeless Fine Jewelry gift card for the event’s silent auction.

“Most people have no idea just how hard it is and how much money it takes trying to adopt a child,” Jackie says. “This organization speaks to my heart and I want to do everything within my power to help them continue their mission of love and hope.”

Family owned and operated since 1965, Timeless Fine Jewelry has a reputation for being a vintage-inspired yet forward-thinking jewelry company that specializes in bridal and custom jewelry creations. Their unique and colorful designs have been showcased in national publications such at The Knot and Martha Stewart Weddings.

A comprehensive review of what’s new at Stuller

Stephen Lussier to receive the 2022 GEM Award for Lifetime Achievement

Stellari Gold™ from CG Creations introduces “the next generation of vermeil”