(WASHINGTON) – Soaring credit card “swipe” fees are limiting what consumers can afford to buy this holiday season, according to a new TV commercial unveiled by the Merchants Payments Coalition (MPC). 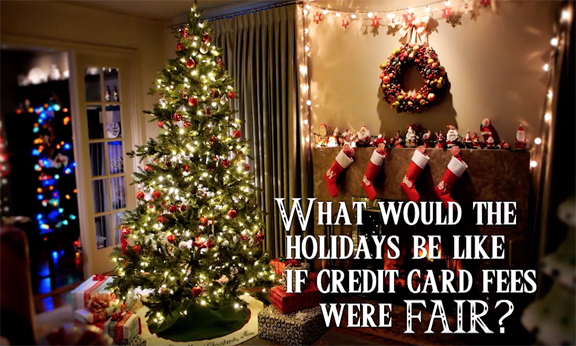 “At a time when Americans are suffering under the effects of inflation, they are paying even more because of hidden swipe fees levied by Visa, Mastercard and the Wall Street megabanks that issue the majority of credit cards,” MPC Executive Committee member and National Association for Convenience Stores General Counsel Doug Kantor said. “U.S. swipe fees are the highest in the industrialized world and drive up prices paid by American consumers. The impact is particularly harmful during the holidays, when many families are stretching their dollars and these fees amount to an unfair private tax on every present and decoration they buy.”

“What would the holidays be like if credit card fees were fair?” an announcer asks as a Christmas tree stands before a roaring fireplace with stockings hung along the mantel. “With the money saved on every swipe, you could get a winter coat for the kids, headphones for your best friend, a soccer ball for your niece.”

“Unfortunately, credit card companies are still stuffing our stockings with unfair hidden swipe fees costing families nearly $1,000 a year,” the ad says. As the Christmas tree crashes to the floor under the weight of swipe fees on cards in a stocking, a narrator calls on viewers to tell Congress to pass the Credit Card Competition Act.

“It takes free market competition to have fair fees – and happier holidays,” the ad says.

The 30-second commercial, which is being run by MPC member NACS, is the latest to air as part of a seven-figure advertising campaign. One previous commercial highlighted Visa’s sponsorship of competition at the FIFA World Cup while refusing to allow competition over swipe fees. Another addressed how lack of competition means Visa and Mastercard “can charge whatever they want.”

The legislation would end Visa and Mastercard’s longstanding monopoly over how transactions on cards issued under their brands are routed for processing. Instead, cards from the nation’s largest banks would be required to be able to be routed over at least one competing network in addition to Visa or Mastercard’s networks. Banks would choose which networks to enable but merchants would then choose which to use, meaning networks would have to compete over fees, security and service, saving merchants and their customers an estimated $11 billion a year. Rewards points would not be affected, security would be improved, consumers would still use the same cards and community banks and small credit unions would be exempt.

Swipe fees centrally set by Visa and Mastercard currently average over 2 percent of each credit card transaction, and credit and debit card swipe fees have more than doubled over the past decade, soaring 25 percent last year alone to a record $137.8 billion. They are most merchants’ highest operating cost after labor and drove up consumer prices by about $900 for the average family last year. As a percentage of the transaction, the amounted collected automatically goes up as prices rise, creating a multiplier effect on inflation that will drive the number even higher this year.

The Merchants Payments Coalition represents retailers, supermarkets, convenience stores, gasoline stations, online merchants and others fighting for a more competitive and transparent card system that is fair to consumers and merchants.