(FORT LAUDERDALE, Fla.) – To honor one of the most ancient and treasured cities in the world, a new DestinationTM Collection design for Jerusalem has been created by Montesino International, a recognized leader in the creation, production and manufacturing of DestinationTM and specialty jewelry.

“The Old City of Jerusalem not only has international appeal, but it also carries a deep historic and religious significance for billions of people all across the world,” said Mitchell D. Ousley, President, CEO and Lead Product Designer of Montesino International. “For many people, Jerusalem is a testament to their individual beliefs so we created the Jerusalem DestinationTM Bracelet in precious metals as a reminder that there is hope for peace among nations.” 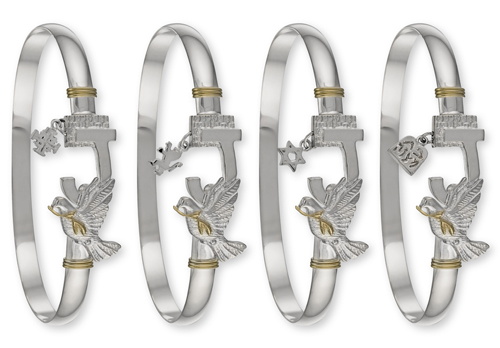 The Jerusalem Destination Bracelet features a stylized symbol of the “City of Peace,” the Jerusalem Dove, which carries an olive branch in her beak, while grasping a “J” that is crested by a likeness of the cherished Western Wall. According to Ousley, the union of the two represents the joining of the world and all her people in much needed peace. The bracelet is highlighted by six gold wraps of 14 karat gold that symbolize the six ancient gates that lead into “Jerusalem the Golden.” A choice of four different charms is available to individualize the bracelet including a Bat Mitzvah, Star of David, Jerusalem Cross or Lion of Judah charm.

The bracelet became available at the beginning of April in Jerusalem at a number of fine jewelers through a distribution agreement with Boston-based, The Lost Temple, Inc. (TLTI). Shira Steinberg of TLTI, who participated in the design of the bracelet, said the 4mm bracelet will retail for $145 and one selected charm is included in the price. It will also be sold at exclusive jewelers in the United States.

More information can be found at www.jerusalembracelets.com.