Held August 9-11, 2008 at the Cobb Galleria Centre, the Atlanta Jewelry Show generated reports of steady business and a renewed optimism about retail sales for the 4th quarter and into 2009. Reinforcing the positive atmosphere, buyers responded enthusiastically to the show’s ever-growing roster of special programs and features, including the enhanced SJTA Rewards program, SJTA U educational series, and popular Buyer Gala.

“In light of today’s challenging economic climate, we were very pleased with the attendance and with the business activity that the August show generated,” says Carol Young, executive director, Southern Jewelry Travelers Association (SJTA), producers of the Atlanta Jewelry Show. “While our attendance took a slight dip from the August ‘07 show, most exhibitors told us they were quite pleased with the business they wrote with current as well as new customers.”

Exhibitor reports included steady order-writing during the show, which continues to attract retailers from throughout the southeast region, as well as increasing numbers from other parts of the country. 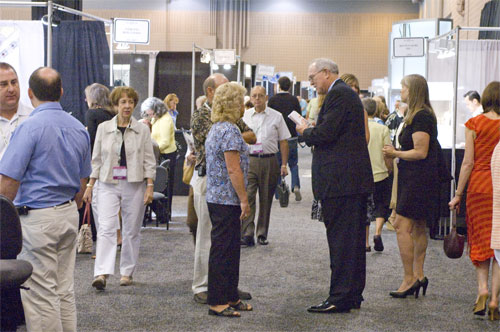 Despite the difficult economic climate business was steady and the mood was optimistic at the August 2008 Atlanta Jewelry Show.

“The show has been phenomenal for us,” said Lori Baker, manager, William & James. “The traffic has been good and the show floor is upbeat. I think everyone is expecting a good Christmas. We could have left after the first day and been very happy with the orders we wrote on that day alone.”

“This show offers an ideal way to service my southeastern accounts,” adds Alix Michel, director of operations, Susan Michel Ltd. “We’ve been very happy with the show because we’ve seen all of our regional accounts and opened some great new ones.”

“This show has offered great exposure to new prospects and new customers,” notes Dora Leviton, B & D Diamonds, a first-time exhibitor with the Atlanta Jewelry Show.

Attending retailers had the chance to explore best-sellers and new introductions from more than 600 exhibiting companies. The product selection was complemented by a full roster of buyer services that the Atlanta Jewelry Show offers. Among the most popular being the SJTA Rewards program. Retailers earn reward points for every order placed at the show, and with a streamlined awarding process, retailers quickly and easily earn points, which can then be redeemed for a wide array of rewards, including electronics, luxury travel packages and more.

Retailers also had the opportunity to sharpen their business skills by attending an array of vital educational programs on issues ranging from promotion and pricing to Internet marketing. Among the highlights was a special keynote address by Kivi Bernhard, CEO and Founder of Kivi International, LLC. During his program, “The Hunt For Market Share!™ -Lessons From the African Leopard,” Bernhard used the example of the most successful and adaptable predator on earth to help outline tips for making and keeping clients, customers and profits in today’s global economy.

The Atlanta Jewelry Show also got into the true spirit of the Olympic Games with its Sunday night Buyer Gala. Themed “Go For the Gold,” the festive evening offered a salute to the Summer Olympics in Beijing with brightly colored decorations filling the Renaissance Waverly Hotel party site. As they entered the party, buyers and exhibitors were presented with gold medals before they moved on to network, relax, unwind and sample delicious treats from many of the participating countries in the Games.

Completing the show services line-up, retailers were also able to take advantage of the popular “Tanks on Us” program, which awarded gas cards to pre-registered attendees; special New Exhibitor Meet & Greet presentations on Sunday morning offering a first-hand introduction to some of the newest items featured at the show; the High Flying Buyers Lounge, and complimentary buyer breakfasts each day.