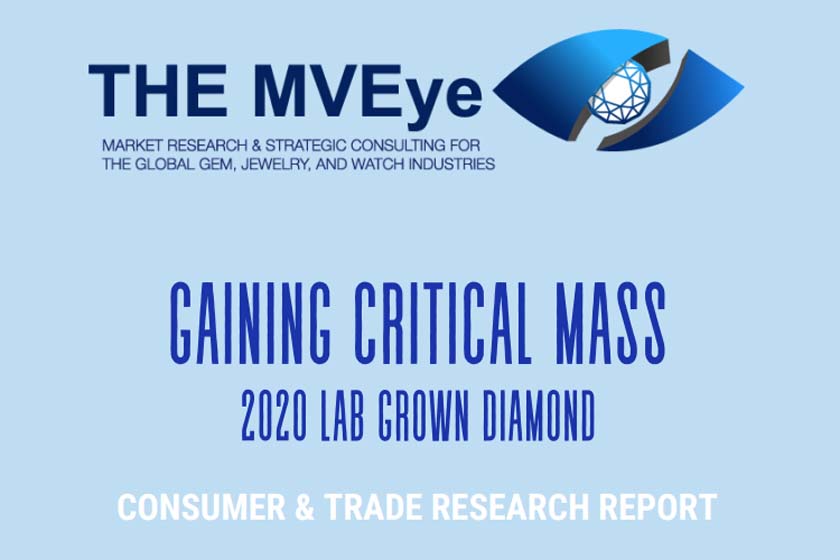 “Today awareness among jewelry consumers is at 80% across gender, age, and household income for a product category that has grown without even trying,” said Marty Hurwitz, CEO of MVI Marketing LLC (THE MVEye), a leader in market research for the global gem, jewelry and watch industries, which forecasts that by holiday 2020, more than 50% of independent jewelers will carry lab grown diamonds.

“Lab-grown diamonds are a high margin category for retailers while offering consumers a 30 percent advantage in price and size, which especially appeals to Millennials,” says Hurwitz, who has tracked the development of the lab-grown diamond market since 2004.

Jewelry consumers are asking for lab-grown diamonds, and they expect the product to be among the fine jewelry offerings where they shop.

Consumers are most drawn to the size-to-value equation. Shopping within a budget, as most consumers do, when shown both mined and lab-grown diamonds, the bigger stone of the same quality in lab-grown diamond appears to be the winning proposition for most couples getting engaged. Eco-friendliness is the icing on their diamond cake, especially for Millennials.

Jewelers who successfully sell lab-grown diamonds report a closing ratio of 60% to 80% once customers learn about the product.

An estimated 38% of independent retailers in the U.S. offer LGD in-store and/or online.

A majority of LGD retailers surveyed (61%) expressed extreme satisfaction with the decision to stock and promote this product category.

Nearly all (95%) of LGD retailers in the survey report better margins with lab-grown diamonds with 78% reporting LGD margins of 16% to over 40% better than mined diamonds.

Hurwitz advocates that jewelers remember they’re in the love and emotion business. “Jewelers have to make a profit and hanging onto one product that sells love may not be a good idea. Rather retailers should present consumers with a choice of both mined and lab-grown diamonds, and make money with the products consumers see as love.”

The 2020 study, co-sponsored by the International Grown Diamond Association (IGDA) and INSTORE Magazine, builds on data gathered in a national consumer study conducted in September 2018, as well as research from THE MVEye tracking the historical progression of the lab-grown diamond category. The report is the result of national quantitative online studies and video interviews with consumers, and one on one evaluations of jewelry retailers. 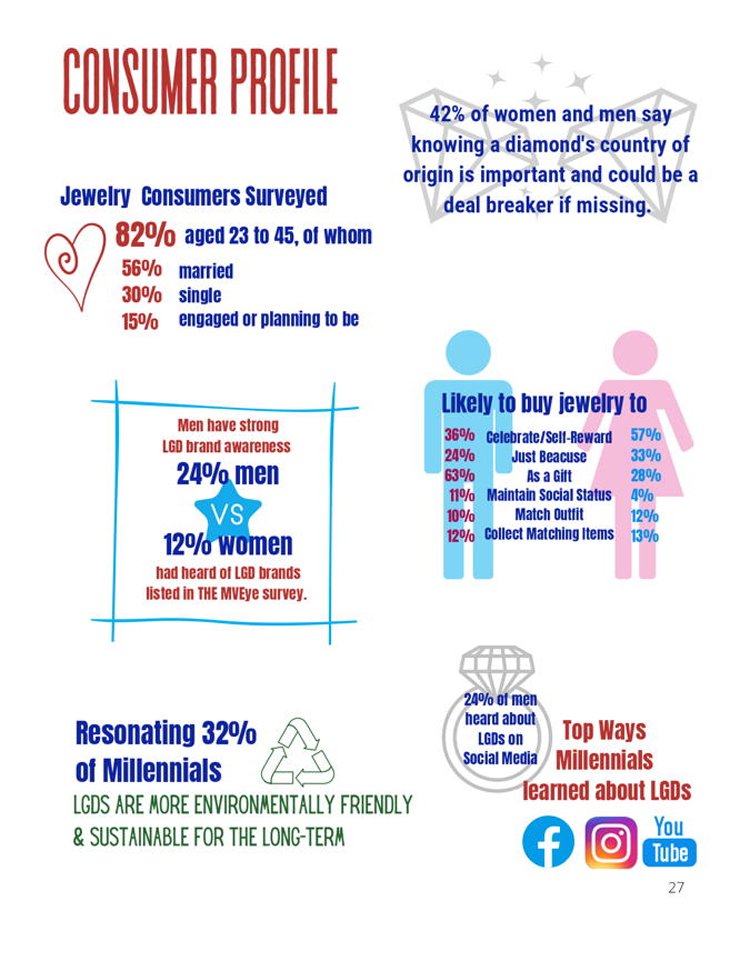 Younger consumers are the ones buying fine jewelry, diamond jewelry and LGD jewelry. And many are single or getting engaged. The data clearly show that in the last two years older consumers are not the ones spending.

Not surprising, when we hear from the leading online wedding planning portal, The Knot, that the average first time marrying age in the United States is 32, according to its wedding survey of 27,000 couples married in 2019. Factors like the evolving workforce, a stronger sense of self, and overall societal behavioral patterns all play a role in influencing the average age of marriage in the U.S.

LGD awareness was highest among the youngest age group, 82%. Although 36-45 year olds were not far behind, with 80% of their age group aware of lab grown diamonds. Surprisingly, it appears that more men (86%) than women (75%) had LGD awareness prior to reading the statement in the survey.

In fact, men had strong awareness for many of the brands. A quarter of women, compared to 12% of men, had not heard of any of the LGD brands listed. Brands familiar to both genders were DIAMA by Swarovski, Pure Grown Diamond and With Clarity. The brands for which women had more awareness than men were Brilliant Earth and Renaissance.

More men than women learned about lab-grown diamonds from a family member and social media. More women than men learned about the product in a jewelry store, advertisement, and news report.

Consumers across all age groups, upon learning about lab-grown diamonds, expressed some positive feedback, curiosity and skepticism. But of the three age groups, more 23-35 year olds felt overwhelmingly positive, while the 46-55 year olds expressed the most skepticism.

In the 2018 consumer survey, nearly three quarters of respondents aged 31-40 had a positive reaction to lab-grown diamonds, followed by the 21-30 years at 37%. The older age groups were the least enthusiastic then.

Motivators to buying fine jewelry in general for consumers across gender, age, marital status, and household income are to celebrate or reward self, to give gifts to loved ones, and for no reason other than just because. But there are some interesting nuances to these trends as you dive into the demographic data.

More women than men are likely to buy jewelry to celebrate and self-reward, with 33% of women citing just because. Thirty-two percent of women are influenced by trending design styles, 37% by a price too good to pass up, and 28% are moved to buy because of the designer or brand.

Sixty-three percent of men are likely buy fine jewelry to gift to someone they love – a role that men have historically played, perhaps to a lesser degree today as more women need no excuse to buy jewelry for themselves. They are also more likely to do so if they know someone would like the gift or requested it. Notably, more men than women are likely to buy jewelry for social status.

THE MVEye provides consumer and trade market research along with strategic consulting services to a global client list in the gem, jewelry and watch industries. Marty Hurwitz is the CEO and founder. After careers in television, advertising and oil, Marty became a third-generation jewelry retailer when he partnered with a childhood friend in a retail jewelry store in New York City in 1984. He founded MVI Marketing LLC (THE MVEye) in 1989 with his wife, Liz Chatelain, and moved to California where they grew THE MVEye into an internationally recognized organization while raising two children (Ray and Helaina). Learn more about THE MVEye at THEMVEye.com.