The highly anticipated INSTORE Show lives up to expectations

(CHICAGO) – Perhaps the most anticipated show of the year, The Smart Jewelry Show ended with hurrahs and accolades from both vendors and retailers. During exit interviews, retailers were applauding the creativity of this symposium – citing new and innovative methods of getting vendors and store owners alike to see their industry through new eyes.

The INSTORE Show, held at the Navy Pier from April 19 – 21, 2009 marked the first time a trade show took on the personality of a huge Broadway Stage Production. And, like an entertainment show, The INSTORE Show offered fun-filled challenges between artisans, designers and bench jewelers, an imaginative “store within a store”, seminars on subjects that covered almost every topic imaginable and the now infamous “Cool Store Reception” celebrating the environments that truly stimulate the senses. 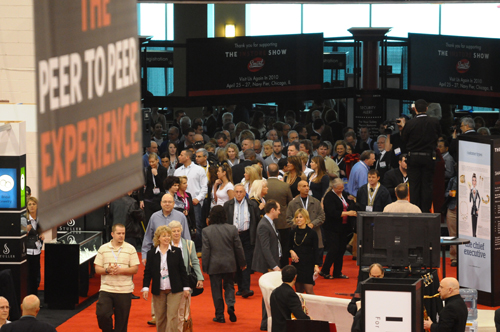 All told, The Smart Jewelry Show offered the industry an inside look at what can be done within the context of a trade arena – with new ways of stimulating both suppliers and retailers.

Like the magazine sharing the name, the Show brought home the idea that a business to business venue can be as welcoming as a consumer show – using the primary principle of recognition – Everyone Is A Consumer. What made this show different, though, was the expert guidance given to retailers on – not only what to buy – but when, where and how to buy.

Seminar speakers also provided great support in areas where jewelers need new information and insights. The topics were far reaching and the speakers dynamic and precise in their presentations.

Terry Chandler, President & CEO of the Diamond Council of America, participated in the Show as both speaker and moderator. When asked his opinion on the show’s layout and success he responded, “Without question, having the education and training seminars on the show floor was unique and very effective. Participants came out of the sessions energized and were immediately surrounded by vendors’ booths they may have otherwise missed.” Mr. Chandler felt that the “store in a store” bench challenges and Cool Store competition were inviting and “extended the feel of ‘real time’ activity, producing the feel that these events were not merely demonstrations, but rather, ‘happenings’ that were unfolding before one’s very eyes – interactive and hands-on.” 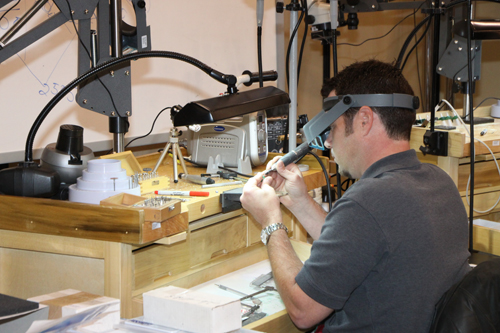 Pictured is a contestant in the Bench Pressure Challenge hard at work.

The success of the Instore Magazine was brought to life at the Show. “Instore managed to transfer the magazine’s feel to the Show, creating in the attendees a sense that they needed to engage and be a part of all the activities. There was a feeling one gets from the publication that the Show and all its opportunities were valid and nothing should be missed. The optimistic mood was directly related to the ‘bones’ and structure of the show that were themselves constructive and upbeat,” Mr. Chandler commented. “The effectiveness of Instore Magazine was transferred to the show itself ‘in spades.'”
Overall, the reaction from attendees and vendors was overwhelming. One such retailer simply asked upon leaving the show, “When can we do this again?”