What should you do if you are the victim of a robbery?

Officer Kadison (not his real name) stood in front of the group, each connected in some way to the jewelry industry. Those seated had been invited to an interactive security briefing titled “A Mock Robbery” and were aware that part of the presentation would include a staged robbery and the audience would be witnesses.

The Cobb County (GA) officer had quizzed the audience about the difference between a burglary and a robbery, explaining that many people call 911 and say “I have been robbed” after coming to their home, store or office and finding the mess after a break in. In reality they have been burglarized and only when the individual is confronted by the criminal while attempting to steal property is the crime a robbery.

Even forewarned, the audience was alarmed when doors in the back of the room were crashed open and masked robbers screaming and yelling “heads down” and “don’t look at me” burst into the room and threatened individuals and told them “face down on the floor.” Screaming “who’s got the money?” repeatedly while threatening audience members with a weapon, the criminals quickly found the money bag and after grabbing it took off out the door.

Organized by the Georgia GIA Alumni Association the evening event took place in the in on Wednesday, August 25. Association president Kathy Regan introduced the police officers. A first of its kind in , the goal was to provide an insightful and useful experience that is similar to the training police receive regarding robberies and thefts. We were not able to take photographs of the officers or use their real names due to security requirements.

Immediately after the “robbers” left the room the officer started asking the “witnesses” for descriptions of the robbers as he would when arriving on the scene of an actual crime. “How many were there?” “How old were they?” “Can you describe them?” That’s when the responses started. “Two males.” “I thought there were three.” “He carried a baton and was in his 40s or 50s.” Scant descriptions were offered as the men were dressed in dark clothing and wore bandanas and ski masks and were in the room for only seconds. 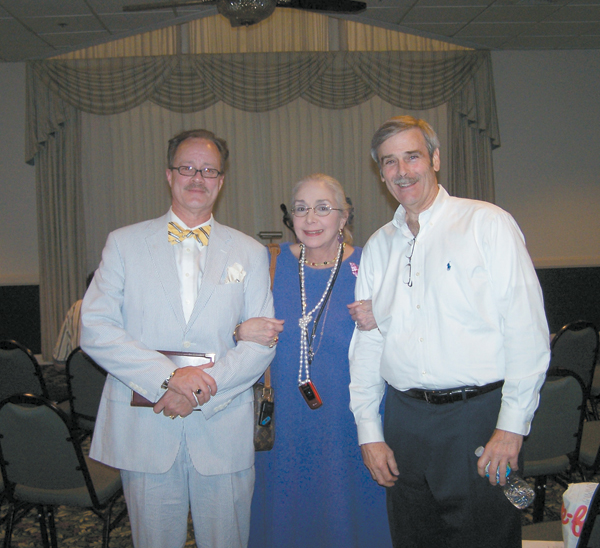 Andrew Hinkle and Gayla Dalton both from Golden Fleece in Atlanta chat with Mike Fallaize (right) of Fallaize Insurance Agency, also from Atlanta.

Officer Kadison suggested that if you are forced to the ground, descriptions of the pants and shoes and shoe size as well as accents heard are a great help. One attendee described the watch one man was wearing. Many guessed at heights and build. When the two officers who had played the thieves later entered the room in their uniforms, many were surprised to find out the man with the bandana over his face was just 40 years old and the two criminals were actually very different in size, one being much slighter in build than the other.

The trio from the Cobb County Special Operations division reviewed many safety measures with the audience and suggested that the best time to report suspicious activity is before anything happens. The safety of the employees and customers is more important than anything of value. They urged that when confronted you should give the robbers what they want and to keep your composure. “Most of the time the robbers are not career criminals like you see on television,” but are high, drunk or otherwise desperate. Cooperation is imperative; do not agitate them, especially to avoid a hostage situation.

If faced with a robbery in your place of business the police suggested that the following would occur as soon as the police arrive:

When opening your store or business first thing in the day, if you notice something strange or “not right” step out and call the police and leave things as they are until they arrive. If it turns out to be nothing you can apologize but your safety is important.

When asked about surveillance cameras and systems, the officers suggested putting them everywhere but the restrooms. Signs or stickers should notify customers that they are under surveillance and may be recorded. Cameras in your parking lot should be at eye level so that license plate numbers can be captured. Many people have the cameras installed up high, but this will not help you get the images you need.

Background checks should be done on everyone. The officers related a story about an employee who worked their way up only to rob the safe of $31,000 at a Cobb County Kroger grocery store the first day the manager trainee was given the safe combination.

During a question and answer period some asked about pep per spray and guns. The officers warned against either being used against you or your employees if you don’t know how to use it and it gets into the hands of the robbers. Yes was the answer to should I have a gun at my store. “You must be trained on it, know how to use it and practice with it often to keep it fresh in your mind. You must be willing to use it to defend your property or your life.” If carrying your gun, it should be concealed when you are at your place of business.

Some other tips offered: