Will this man walk into your store next?

Martha Melvin has been in the jewelry business for over 25 years. She owns M&M, Ltd. in Winston Salem, North Carolina with her son Robert. M&M specializes in estate jewelry and is known for both buying and selling. She has seen many things in her career and feels she is a good judge of character as well as estate jewelry. 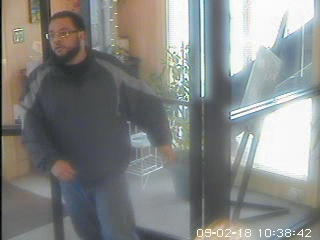 On February 18 all of that changed when a well dressed man walked into her store after he was referred to M&M by a jeweler in Greensboro, North Carolina. The well spoken customer was not in a hurry and talked about his situation with Ms. Melvin at leisure. Claiming he was out of work and his home was about to be lost to foreclosure that afternoon necessitated that he sell his wife’s engagement ring and the diamond earrings in his ears immediately.

Upon examination Melvin found both items to be of exceptional quality – the engagement ring had a four carat VS1 center stone – and told the customer that she could contact dealers in New York to get him top value for his jewelry. 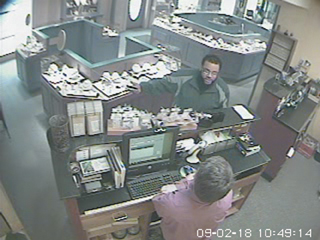 After discussing the “clients” immediate need for cash for about 40 minutes, Melvin and the client struck a deal. The jewelry was examined a second time, but at the point of the exchange the bag holding the ring and pair of earrings was somehow switched. When the customer reached the door and began to run, the items in the bag were found to be imposters. Melvin’s cash was gone.

Communications with other jewelers revealed the rental car he was driving was rented in New Jersey with a stolen credit card, had Florida plates and had not been returned. Melvin is in contact with a New Jersey detective who knew of the man and continues to work on this and other cases in which he is implicated. (Images taken from a North Carolina jewelry store’s security system of a suspected switch artist.)

“Although I am sick about this loss, I have had to let it go. Otherwise it will eat you up,” says Melvin. She has communicated with jewelers throughout North Carolina as well as other states to warn them about this criminal and try to track him down.

He is described as a 35-45 year old light skinned black male, 5′ 8″ to 5′ 10″ tall, 200-220 lbs, and was wearing a white face stainless Rolex Daytona. He gave a fake New York license with the name James Howard. He told another jeweler his name was Robert.