The Women’s Jewelry Association’s (WJA) 25th annual Awards for Excellence, held on July 27 at Chelsea Piers in New York City, was a festive toast to the women who founded and nurtured the organization as well as to two exceptional industry leaders. Sybil Yurman, president and CMO of David Yurman, and Steven Kaiser, president and CEO of Kaiser Time, received WJA’s highest honors.

On accepting her Hall of Fame Lifetime Achievement Award, Ms. Yurman said, “It’s not often that you get to do what you love and get to do it with someone you love.” She also acknowledged Carolyn Kelly, former jewelry buyer at Saks Fifth Avenue, and now co-owner of Old World Chain, for “helping in the early years.” She spoke about the sense of “family” in the industry and acknowledged “all the people who have taught us so much.”

Mr. Kaiser, who received the Ben Kaiser Award, was introduced by retailers John Green and Lee Berg. He said his father, after whom the award was named, was ahead of his time for promoting women in the industry. He thanked his mother, Eta, wife, Vivian, and daughter, Emily, and acknowledged his female team, who were in attendance.

WJA’s president Yancy Weinrich, Industry VP, JCK Events, recognized the association’s three “Pillar of Distinction” sponsors: Platinum Guild International, Jewelers Mutual Insurance, and David Yurman. She also introduced a special 25th anniversary video that had been produced by Filmworks, Inc. and overseen by Anniversary Co-chairs Linda Goldstein, a WJA founder and former president, and Billie Sutter, a former national board member. With interviews from many of the influential women responsible for the creation and growth of the organization, it highlighted key initiatives, such as WJA’s Student Scholarships, DIVA Awards, Awards for Excellence and the Women in the Know conferences.

In celebration of WJA’s 25th year, Ms. Weinrich announced that $25,000 will be distributed this year in Student Scholarships, one of the first programs of the national organization when it was established in 1983. WJA’s annual Scholarship Fund is supported by its Silent Auction, held during the Awards for Excellence gala, and donations from companies and individuals. Overseeing the 2008 Silent Auction was Nessi Erkmenoglu of Harper’s Bazaar.

Monies raised from a drawing for a special Hearts On Fire “Dream” diamond will also be donated to the WJA Scholarship Fund, according to Dinner Chair Lisa Cochin of Diamond Promotion Service. 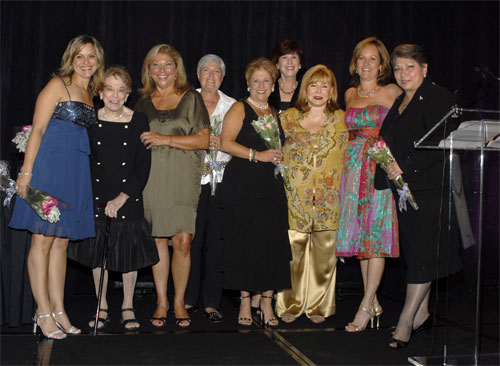 Other highlights of the evening included Broadway musical selections from Broadway Pops International. To top off the dinner, guests enjoyed a delectable dessert buffet and danced to hip music by DJ Aaron James, sponsored by Harper’s Bazaar. The party continued long into the night!

WJA, founded in 1983, is the preeminent association of professional women in the jewelry, watch and related industries. Through the national organization, headquartered in Chicago Ridge, IL, and a network of 12 regional chapters, members benefit from educational and networking opportunities, scholarships, design competitions, annual women’s business conferences, and recognition programs, such as its annual Awards for Excellence gala. For more information about WJA, call 708-361-6266 or visit www.womensjewelry.org.