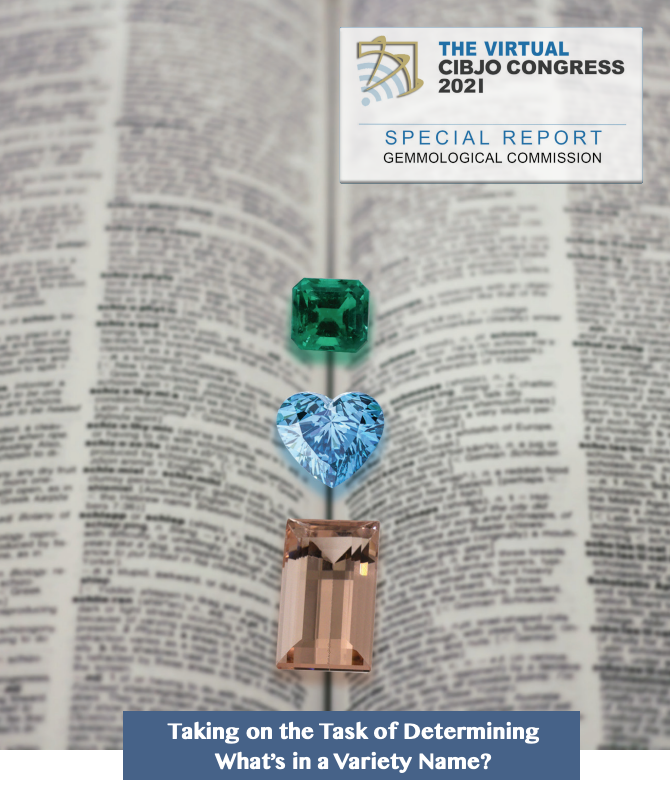 (MILAN, Italy) – With the November 1 opening of the 2021 CIBJO Congress right around the corner, the sixth of this year’s CIBJO Special Reports has been released. Prepared by CIBJO’s Gemmological Commission, headed by Hanco Zwaan, the report focuses on two issues, namely the establishment of criteria for defining gem variety names, and the creation of an international set of standards, practices and nomenclature for the mainly jade and jadeite gem materials referred to as Fei Cui.

As Zwaan reports, a new Committee on Varietal Names was established after the last CIBJO Congress, which took place in Bahrain in 2019, under the auspices of the Gemmological Commission Steering Committee. It has already produced a preliminary draft of a document listing gem materials and definitions, which will be presented and discussed during the Gemmological Commission’s online session on November 3, as part of the upcoming CIBJO Congress.

Fei Cui, which is a trade name predominantly used in Asian countries, is associated with the minerals jadeite, omphacite and kosmochlor, and represents a jewelry category that has an annual global net worth second only to diamonds. In its respect, CIBJO has set up a working group that is charged with creating universally accepted standards, practices and nomenclature, building upon the body of work already carried out by the Gemmological Association of Hong Kong, the National Gem Testing Centre of Beijing and others.

CIBJO congresses serve as the official gathering place for the World Jewellery Confederation’s global membership, and are also the venue for the annual meetings of CIBJO’s sectoral commissions, where amendments can be introduced to the organization’s definitive directories of international industry standards for diamonds, colored stones, pearls, gem labs, precious metals, coral and responsible sourcing, known as the Blue Books.

The CIBJO Congress is also where the program of World Jewellery Confederation Education Foundation (WJCEF), relating to responsible and sustainable activities in the industry and CIBJO’s ongoing cooperation with the United Nations and its development program is reported upon.

How to convince Millennials to rave about your jewelry store