Captures favorite quotes and observations about beauty and his inspiration 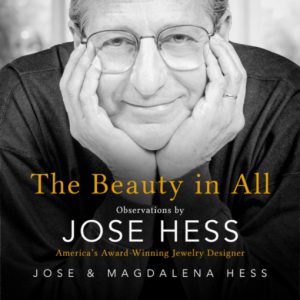 Award-winning jewelry designer Jose Hess, one of the original leaders of the American designer jewelry movement, was often asked, “How do you come about creating your designs?”

He often answered, in a simple way, “It’s a flower, it’s the morning rising sun, it’s a tree, the leaves. It’s all love.”

The observations of the man who saw beauty everywhere are celebrated in a forthcoming book. Lovingly written by wife and design partner Magdalena Hess, the coffee table volume captures the essence of his creative soul, which was the fact that he never lost the wonder of the world around him, and saw beauty in literally everything. He often jotted his thoughts and observations in a journal, from which the heart of the book comes.

“He had such a beautiful outlook on things,” says Magdalena. “When I read his journal, I thought I’d put his wonderful thoughts into a book, together with pictures of things we’d designed.”

As a youth, Jose learned the entire jewelry-making process, from melting gold through creating sheet or wire and setting precious gems by hand. He immigrated to the United States, finished his education, worked his way up in the jewelry industry, and landed a job with a legendary jewelry designer before he set out on his own.

Jewelry store owners loved his designs, but refused to sell them under his name. Jose made it his mission to forge acceptance of branded and designer jewelry, becoming one of the architects of the entire designer and branded sector of the industry, and one of the “fathers of American jewelry design.”

Always an advocate for designer jewelry, Jose became an industry leader, serving as the first American president of CIBJO. He was active in the founding of the American Jewelry Design Council and later continued to mentor emerging young designers and consult for jewelry companies around the world.

The 52-page coffee table book offers Jose’s insights and observations on a variety of subjects, such as love, beauty, humor, friendship, children, marriage, even a chapter on advice to young designers, and much more, taken from the many journals he left behind with his beloved Magdalena.

“I am blessed to have had Jose as soulmate, creative partner, friend, husband, and the love of my life. This book is for all family and friends in our lives,” says Magdalena.

To buy a copy in any of its various editions, visit JoseHess.com.