(NEW YORK) – The Natural Diamond Council (NDC) announced the imminent launch of its global advertising campaign with the sentiment: “To Treasure, Now and Forever”, which celebrates the longevity, beauty, and versatility of natural diamonds throughout all the roles one may play in life. The campaign features the freshly appointed British actor, Lily James to Global Ambassador.

Ms. James has had a diversified, international acting career, and is a celebrated Hollywood star who recently received her first Emmy nomination for Outstanding Lead Actress in a Limited Series for her performance as Pamela Anderson in Pam & Tommy. Ms. James’ next feature film project, Providence, is currently in post-production. 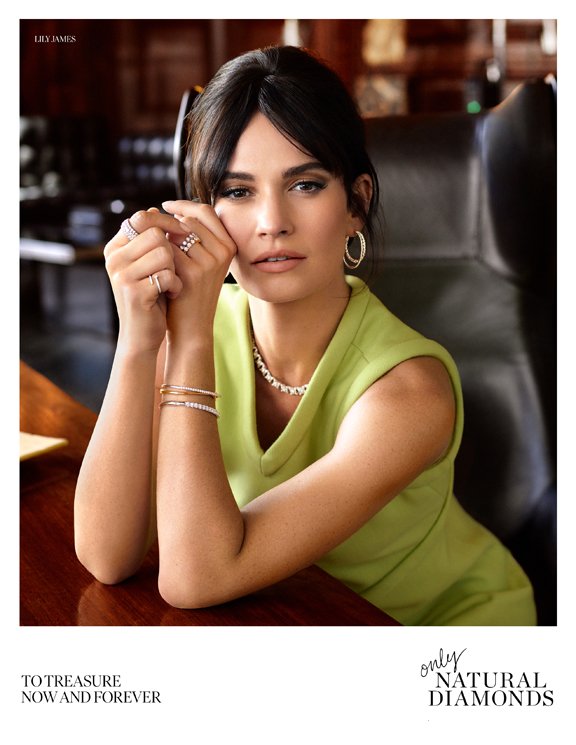 “Lily James is the modern epitome of natural diamonds,” says David Kellie, CEO of Natural Diamond Council. “With her recent Emmy nomination, Lily has been recognized as one of the leading actors in the world. The talent, versatility, and authenticity she brings to the table are the perfect attributes to represent natural diamonds. We are thrilled to have her join us as we build upon the success of another record-breaking year for natural diamond jewelry.”

“I am so excited and proud to be the Global Ambassador for Natural Diamond Council,” says James. “It has been illuminating to discover the positive impact of the natural diamond industry across the globe and its commitment to continued improvement. I am eager to witness more of this firsthand in my new role.”

Ms. James shines in NDC’s natural diamond universe, serving as the main inspiration for the 45-second campaign film which captures a series of scenes relevant to the myriad of roles Ms. James plays on and off camera. Set throughout London, where Ms. James resides, the film draws the eye to its heroine from street, to set, and to stage. Each moment, whether big or small, is decorated by life’s most meaningful adornments, sparkling pieces of diamond jewelry underscoring the film’s manifesto, “To Treasure, Now and Forever.”

“Women self-purchasing natural diamond jewelry continues to be a dominant growth driver for the sector,” says Kristina Buckley Kayel, Managing Director of NDC. “Women today play many roles in life, and a natural diamond jewelry purchase is a way to express reward, self-love, and individuality which we aim to personify through our campaign film. The diamond jewelry is a constant reminder of her deservingness no matter what she has going on!”

As a brand-agnostic, not-for-profit organization which celebrates the creativity and values of the natural diamond category, NDC’s campaign showcases a range of diamond jewelry styles from staples like tennis bracelets and necklaces, studs and hoops, to original creations including statement earrings or spiral bracelets. All of these pieces were sourced from independent designers, brands, and NDC’s official retail partners who will also run the campaign into 2023 through a co-op advertising program. There is strong commitment across the United States from NDC’s official retail partners heading into the holiday season including high level digital and traditional media placements by independent luxury retailers such as Hamilton Jewelers (NJ, FL), Bachendorf’s (TX), Razny (IL), Hyde Park (CO, AZ, CA), and Sissy’s Log Cabin (AR, TN).

Building upon the success of NDC’s previous advertising campaigns, Ms. James wears jewelry specifically created for the campaign that are IP-protected and extensions of bestseller items such as the Soleil pendant, designed by Malyia McNaughton, an alumni of NDC’s Emerging Designers Diamond Initiative, which is now reimagined as earrings and a bracelet. The selection of campaign-specific jewelry pieces are available upon request and can be interpreted by retailers globally. All jewelry worn in the campaign will be showcased in an immersive look book on a dedicated campaign website located on naturaldiamonds.com, which has received over 130 million unique visitors in 2021. 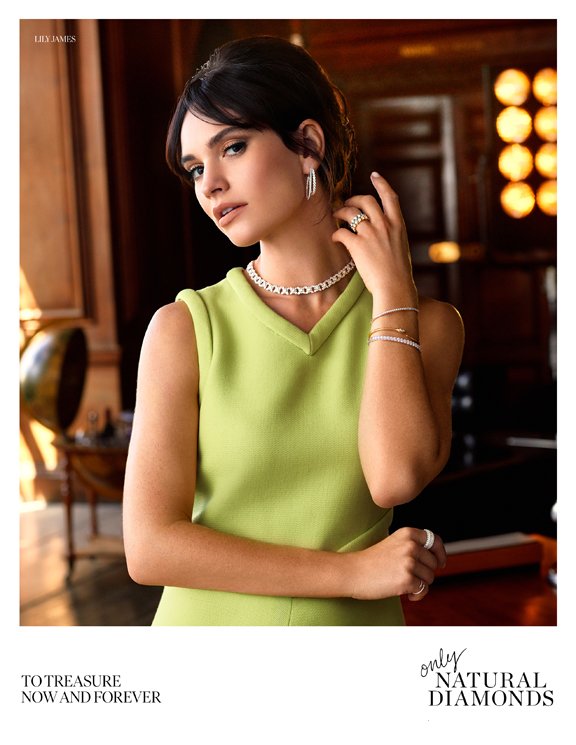 The advertising strategy focuses predominantly on digital video including presence on streaming services, Hulu and Peacock. Campaign creative will run across print and digital media outlets and be present out-of-home in transit shelters in the New York and Los Angeles markets. The campaign will also run in the UK, France, India, UAE, and China.

The campaign was directed by Manu Cossu and photographed by Sasha Marro, in addition to Molly SJ Lowe. Rebecca Corbin-Murray provided fashion styling for Ms. James.

The Natural Diamond Council (NDC) inspires and informs consumers about the incredible world of natural diamonds through its Only Natural Diamonds platform. The platform is the authoritative publisher on all things natural diamonds including celebrities and pop culture, epic diamonds and jewelry trends, engagements and weddings, and diamond buying guides.

The NDC supports the integrity of the natural diamond industry by providing transparency and insight on the progress of this sector and its commitments to further betterment. NDC is a global organization whose members’ operations span four continents and ten countries including Canada, South Africa, and Botswana. Their operations support the livelihood of 10 million industry employees and their families around the world.

The NDC operates in the US, China, India, UAE, and Europe.