Johnkoivulaite, discovered in Myanmar, is a member of the beryl family

The 1.16 ct crystal – accepted by the International Mineralogical Association as a new mineral species – was found in the Mogok Valley of Myanmar by local gemologist Nay Myo. GIA Senior Research Scientist Aaron Palke presented the newly-named mineral at the Geological Society of America (GSA) conference on Sept. 25 in Phoenix, AZ.

“We are privileged to be able to name this mineral after John Koivula who has contributed so much to science and the gem and jewelry industry as a prominent gemologist and innovator in photomicrography,” said Tom Moses, executive vice president and chief laboratory and research officer. “Discoveries such as this remind us of the importance of our mission-based research and of the numerous important contributions John has made in his more than four decades of scientific work.” 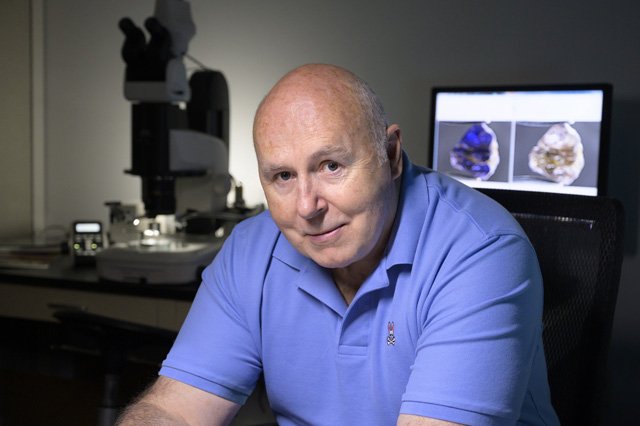 The new mineral johnkoivulaite is named after renowned gemologist John Koivula, best known for his contributions to inclusion research and photomicrography. Photo by Kevin Schumacher/GIA.Johnkoivulaite has a hexagonal crystal structure that is very similar to beryl and other members of the beryl group, such as pezzottaite. Standard gemological testing gave an RI of 1.608, with a birefringence too small to accurately measure, an SG of 3.01, a hardness of 7½, a conchoidal fracture, vitreous luster, and no reaction to long-wave or short-wave UV. This mineral is especially unique due to the strong pleochroism it shows from deep violet to nearly colorless when observed with polarized light.

A specimen of the new mineral now resides in the GIA museum collection, located at the Institute’s world headquarters in Carlsbad, California.

Koivula has more than 40 years of industry experience in research and photomicrograghy. In 1986, Koivula co-authored with Edward J. Gübelin the immensely popular Photoatlas of Inclusions in Gemstones, followed by two additional volumes. Koivula also wrote The Microworld of Diamonds and co-authored Geologica with Robert Coenraads. His many contributions have received broad acclaim. He’s received AGS’s Robert M. Shipley Award, AGA’s Antonio C. Bonanno Award for Excellence in Gemology, GIA’s Richard T. Liddicoat Award for Distinguished Achievement, won first place in Nikon’s Small World Photomicrographic competition in 1984 and was named one of JCK magazine’s 64 Most Influential People in the Jewelry Industry in the 20th Century.